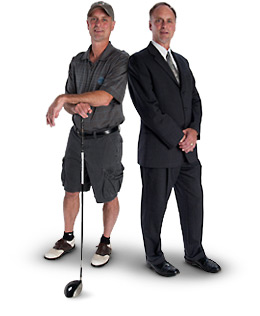 “My father was a funeral director, and the way he helped families led me to follow in his footsteps.”

Greg enjoys what marketing people refer to as an active lifestyle. He plays golf with friends once a week during the summer. When he’s not teeing it up, he’s lacing up his running shoes, and running an average of three miles a day, four days a week. And in between, he hops on his bicycle and rides the trails in and around his home in Sussex. Greg not only has an active lifestyle, we’d call it “cardio lifestyle.” A 1977 graduate of Menomonee Falls East High School, Greg attended UW-Waukesha, before his Mortuary Science degree in 1981 at MATC—making him a second-generation funeral director. Greg not only followed in his father’s footsteps, he followed him in working at Schmidt & Bartelt.