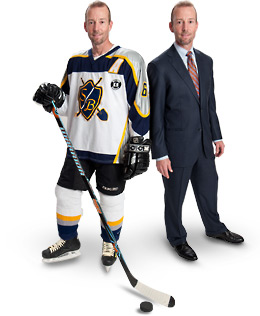 “Time is limited, so I make the most of it, whether for my family at home or the ones I’m serving here.”

As a fourth-generation funeral director, Steve’s career patch began by earning a degree in Business from UW-Stevens Point. He then attended the New England Institute in Boston to earn his degree in Funeral Service. Long before he decided to follow that route, Steve began playing hockey. Today he plays in a rec league and sponsors the team. But that is only one side of Steve’s fitness enthusiasm, as he also participates in triathlons and has completed two Ironman competitions. Yet, he doesn’t skip a beat running the family business—or being home with his family. Which is testament to Steve’s commitment to others—maybe even more to time management skills. A past president of the Brookfield Optimist Club and Funeral Service Alliance, and a member of the Wauwatosa Chamber of Commerce, Steve lives in Menomonee Falls where he and his family belong to Holy Cross Lutheran Church.